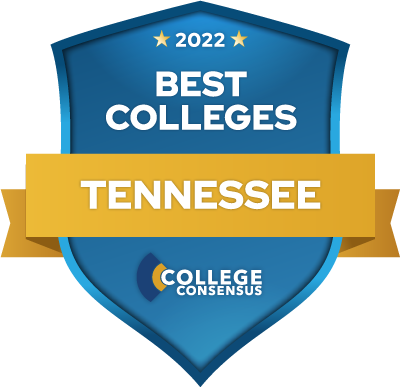 The College Consensus ranking of the Best Colleges in Tennessee combines the results of the most respected college ranking systems with the averaged ratings of thousands of real student reviews from around the web to create a unique college meta-ranking. This approach offers prospective students a comprehensive and holistic perspective missing from other college rankings. Visit our about page for information on which rankings and review sites were included in this year’s consensus rankings.

The Best Colleges & Universities in Tennessee category is limited to the top colleges in Tennessee. Schools that did not qualify for a Consensus Score were ranked by their Student Review score.

If you’re interested in distance learning, check out our ranking of the Best Online Colleges in Tennessee.  You can also find out more about college financial aid with our list of the Top Tennessee Scholarships.

The University of the South
Sewanee, TN

The University of Tennessee-Knoxville
Knoxville, TN

The University of Tennessee-Martin
Martin, TN

What the Best Colleges in Tennessee Have to Offer

The best colleges and universities in Tennessee embrace Tennessee’s past while driving Tennessee’s future. The state is home to one of the prestigious Southern Ivies, Vanderbilt University, a world-class private research university that stands alongside any of the world’s top research institutions. Vanderbilt is the center of healthcare in Tennessee, but also noted for one of the best campus rec centers in the nation, using its resources to improve student life as well as education. With its student support, Vanderbilt is also recognized as a potentially tuition-free college.

Tennessee is also home to one of the nation’s most elite liberal arts colleges, the private institution known as Sewanee: The University of the South. Sewanee has long been one of the best small colleges, best liberal arts colleges, and best mountain colleges in the nation. Schools like these turn their long heritage of excellence into fuel for the next generation of leaders in science, government, education, and culture. But it’s not just the elites – many of Tennessee’s small liberal arts colleges, like Rhodes, Belmont, and Lincoln Memorial University, are ranked among the best regional colleges in the South and also have excellent student to faculty ratio. The liberal arts school is not a thing of the past! Tennessee’s religious roots also means having some of the best Christian colleges and universities like Union University and Lipscomb University. While they come from a variety of denominations – from Methodist and Baptist to the Church of God and the Disciples of Christ – and some emphasize their faith more loudly than others, all of Tennessee’s Christian colleges are known for their commitment to service and good for their communities, from urban to rural, Mississippi Delta to Appalachia.

A private institution has its strengths, like a low student faculty ratio, but Tennessee’s public research and regional institutions bring the most current knowledge and expertise to the people, preparing a workforce for the changes the 21st century has brought to the South. The state is filled with institutions ranked among the best regional universities in the South, including UT Chattanooga, one of the top up-and-coming urban research universities. The flagship, public research institution the University of Tennessee at Knoxville, leads a system of public universities dedicated to the needs of Tennessee, while ranking as one of the top national research universities and best public universities in the US. Middle Tennessee State University, another great state institution is located in a small town – and you guessed it – in the middle of this fine state. Not everyone can afford a private institution, but a public institution can make a difference in countless lives. The diverse student body of a public institution is a great sign for Tennessee’s future.

Making the Tennessee of Tomorrow

Between country in Bristol and Nashville, and blues and rock and roll in Memphis – and don’t forget the immortal national treasure that is Dolly Parton – Tennessee is known primarily for its music. And, to be certain, the music industry has made a tremendous impact on Tennessee; it drives tourism in the state’s largest cities, while the industry itself employs thousands of Tennesseans – not just the stars and producers, obviously, but agents, marketers, lawyers, accountants, and a whole lot of songwriters to keep Nashville’s hits coming. It might be called the Volunteer State, but Tennessee is getting paid.

But music isn’t the only thing going down in Tennessee. In a state long dominated by agriculture, the best colleges in Tennessee have shaped a world of potential that is truly coming to fruition in the 20th century. With research universities built on agriculture and engineering, Tennessee has built world-class healthcare at Vanderbilt and Tennessee Tech University, high-powered business and finance at schools like Rhodes College and Belmont University (where Nashville’s agents, managers, and executives are educated), and a booming tech sector that is making Chattanooga look more and more like Seattle every day.

In Tennessee, people drive education, and education for the people is driving Tennessee straight into the future. There’s a lot of buzz going on in Chattanooga, and while buzz may be worth what it’s worth, there are real, big developments happening in Tennessee. With the growth of tech and service professions, Tennessee is becoming a more diverse state than ever, and people from previously disadvantaged groups who may only have a high school diploma – including rural whites and Native Americans – are going to college to earn a bachelor’s degree and entering professional careers at higher rates. Undergraduate enrollment in online and on-campus programs is high. Online students are coming in at all ages. Graduate programs are growing as well. Tennessee’s investment in higher education is paying off, and the 21st century is seeing the return.

Locations of Popular Colleges in Tennessee