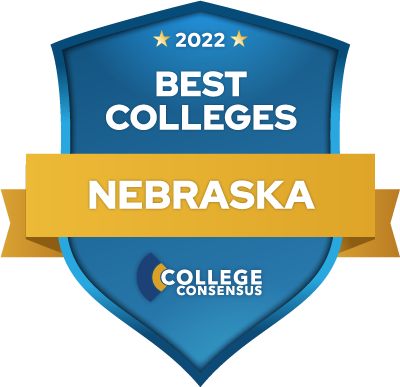 The College Consensus ranking of the Best Colleges in Nebraska combines the results of the most respected college ranking systems with the averaged ratings of thousands of real student reviews from around the web to create a unique college meta-ranking. This approach offers a comprehensive and holistic perspective missing from other college rankings. Visit our about page for information on which rankings and review sites were included in this year’s consensus rankings.

The Best Colleges & Universities in Nebraska category is limited to schools in Nebraska. Schools that did not qualify for a Consensus Score were ranked by their Student Review score.

If you’re interested in distance learning, check out our ranking of the Best Online Colleges in Nebraska.  You can also find out more about college financial aid with our list of the Top Nebraska Scholarships.

When we rank the best colleges Nebraska, we look to the schools that have done the most for Nebraska’s people – the ones that real students praise, and respected authorities admire. Nebraska’s heart, from the earliest days of settlement as a frontier territory, has been its land – it’s not called the Cornhusker State for nothing. And while the University of Nebraska deserves a lot of the credit, Nebraska can point to a whole system of excellent, student and community-focused universities in their midst. Some of the top universities in Nebraska, the members of the UN system – including some of the best regional universities in the Midwest like Wayne State College and the University of Nebraska-Kearney – further encourage exploration, discovery, and innovation.

Nebraska also has some of the top liberal arts colleges and universities in the Midwest and the US, many of them religious in nature. Frontier life, of course, was extremely hard, and Nebraska attracted exceptionally faithful, committed people – Germans, Danes, Czechs – who passed their religion down through education. Top Catholic institutions like Creighton University and the College of Mary are nationally-renowned and give Nebraskans – both Catholic and non-Catholic – a deep grounding in the humanities and sciences. Meanwhile, Christ-centered Protestant and evangelical schools like Union College and Hastings College unite faith and professional learning. Nebraska’s best colleges and universities are dedicated to building Nebraska’s future with inspiring leaders, critical thinkers, and confident professionals.

With its roots in frontier life and agriculture, Nebraska’s culture and lifestyle is defined by democracy, community, and cooperation. That spirit continues in the best colleges in Nebraska; collegiate pride and community are as natural to Nebraska’s college students as silk to the corn. But in the 2000s, there’s more going on in Nebraska, just under the surface; Omaha’s Berkshire-Hathaway has attracted Fortune 500 companies, and with them, some of the most promising young people in Nebraska. With its large area and rural communities, Nebraska is also making online education a priority, earning national attention for distance programs. There’s a quiet revolution going on in Nebraska, and its being built in the business and entrepreneurship programs of the top Nebraska colleges. Watch out, America – tomorrow may just belong to Nebraska.

The funny-shaped state in the center of the country – the only triply-landlocked state, requiring a trip through at least three states to reach an ocean or bay – Nebraska never gets quite enough credit for its accomplishments. The connection between the Midwest and the Great Plains, Nebraska was a destination for frontier families in the 1860s, when the Homestead Act handed out free land to anyone who would make the difficult trek through the Appalachian Mountains, across the Mississippi, and through the plains. With no trees, settlers built homes out of sod; with little rain, they raised cattle on the prairie grasses. It was only through the power of modern technological farming that it was even possible for Nebraska’s settlers to survive: windmills and irrigation and barbed wire, to name just a few crucial innovations.

What most people, even many Nebraskans, might not know is that none of it would have been possible without higher education. The Cornhuskers owe their continued existence to the best universities in Nebraska, especially the University of Nebraska; the university played a tremendous role in making Nebraska possible, developing the Nebraska Method of farming to maintain ecologically sound, productive land usage that revolutionized agriculture and agribusiness. Higher education isn’t necessarily the first thing folks think about when they think about Nebraska (it’s corn. It’s always corn), but Nebraska is a shining example of what happens when colleges care about people.

Looking to the Future with the Best Colleges in Nebraska

Just as Nebraska led the way in scientific agriculture in the 19th century, the best universities in Nebraska are continuing to innovate. Life in Nebraska continues to be dominated by farming, and the state’s research universities are continuing their lifelong efforts to use engineering for Nebraska’s benefit. That includes cutting edge discoveries in energy, sustainability, bioengineering, and technology, and as the state’s economy begins to incorporate more modern industries (like telecommunications), the best universities in Nebraska will build on their STEM foundations. But there’s more to life than technology, and Nebraska is quietly becoming a hub for entrepreneurship. Wide-open spaces have always encouraged creative thinking, and in the 21st century, Nebraska is as wide-open as ever.