Vassar College, a highly selective, coeducational liberal arts college located in Poughkeepsie, New York, is renowned for its pioneering achievements in education and long history of curricular innovation. Established in 1861 by Matthew Vassar as an all-female institution, the college served as a pioneer for women’s education in the United States by offering young women a liberal arts education equal to that of the best men’s colleges of the day. After declining an invitation to merge with Yale, Vassar opened its doors to men and became coeducational in 1969. Located in the scenic Hudson Valley, 75 miles north of New York City, Vassar’s campus is located within a residential area three miles from the city center. Situated on a picturesque 1,000-acre campus, Vassar’s main campus features manicured lawns and formal gardens, while Vassar Farm, a 500-acre area that includes 416-acre preserve used for research, boasts meadows and woodlands.

Consistently ranked among the top liberal arts colleges in the country, Vassar College has proven to be a leader in producing PhD candidates. The school is accredited by the Middle States Commission on Higher Education and awards Bachelor of Arts degrees in more than 50 majors, including an Independent Major which allows students to design their own major, along with various interdisciplinary and multidisciplinary fields of study. Vassar also sponsors a variety of Study Away Programs in countries such as Costa Rica, England, France, Germany, India, Ireland, Italy, Russia, and Spain. Students may also apply for preapproved programs offered by other colleges including approved programs at various US institutions including the historically Black colleges and members of the Twelve College Exchange.

Vassar’s libraries boast more than a million print volumes as well as 50,000 serial titles, over 600,000 pieces of microfilm and an ever increasing number of electronic resources and databases. The school’s Art Center contains one of the oldest college art collections in the country, with over 18,000 paintings, sculptures, prints, drawings, and photographs that span the history of art from ancient Egypt to contemporary America.

Vassar has a total enrollment of over 2,000 and with housing guaranteed all four years, 98% of students live on campus. More than 100 student-lead clubs and organizations exist and over 1,000 campus-wide events are held annually, creating a vibrant and active community life. Events include guest lecturers, visiting artists, performers, workshops, athletic events, concerts, and more. On the Vassar Farm preserve students and faculty engage in research projects. Adjacent to the preserve are the school’s rugby fields, cross country trails, community gardens, and a member-supported organic farm. 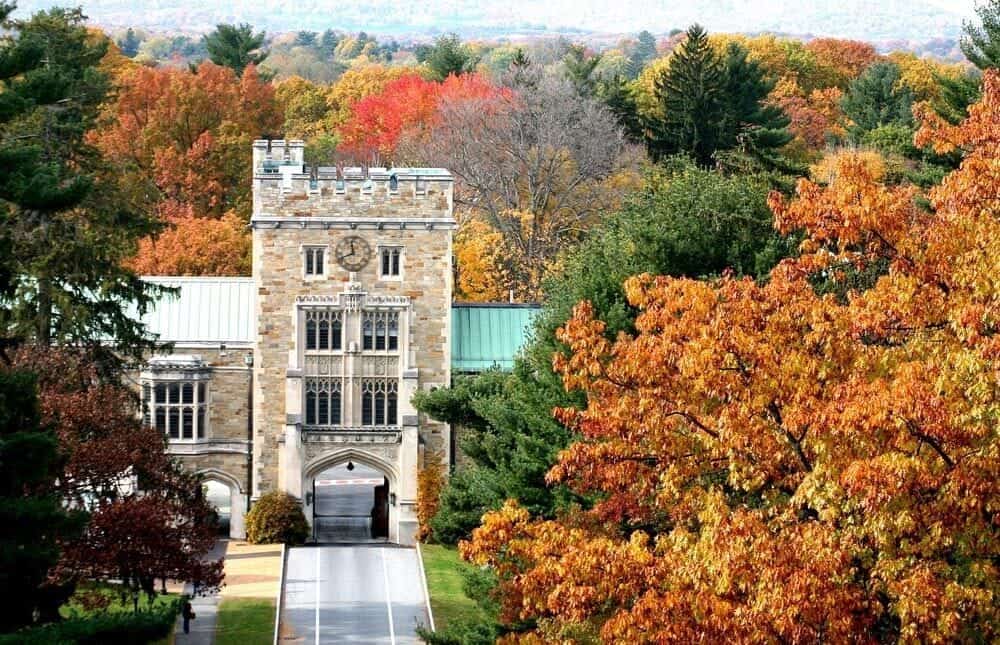