The standard entry education and basics training into the business field has typically been one of a number of finance and business-related college degrees, ranging from accounting to business to finance to economics. However, once one has been hired and worked for a while building up experience, it becomes apparent that to move up quickly into an executive role a masters degree training becomes a huge advantage. The most common of business-related graduate degrees has been and continues to the Masters in Business Administration, better known as the “MBA.” However, the Masters degree in Economics holds its own weight as well, despite being less popular or well-known. Here are some of the key differences between the two.

Described in twenty seconds, the MBA is a summary-level training program designed to give a student all the basics needed to function as a junior executive in a business. However, behind that statement comes a lot of variation and detail. In fact, today’s MBA programs cover a wide range of executive training, from management of information systems to financial portfolio investment and traditional management disciplines in HR and production. The commonality in all of these versions of an MBA involves improvement of a student’s ability to consolidate lots of disparate organization data quickly with critical thinking and quantitative analysis and then be able to communicate or apply that synthesis into strategic decision-making.

The typical track of an MBA program, which is very different from topic specific masters degree programs, covers a rainbow of business areas. These will include:

Interestingly, there are usually no MBA classes covering economics per se. This is assumed to have been taken in undergraduate studies, however. And studies accepted into MBA programs frequently have to prove they have worked in an industry for a few years prior to going back to school, but it’s not a firm requirement in all MBA programs.

The goal of an MBA program is, essentially, to produce an all-around manager ready to be dropped into any supervision role in an organization and be able to function at a basic level. Because the nature of the MBA involves a survey of business versus specialization, it is regularly treated as means by which to learn the building blocks of effective management theory and culture versus advancing in a specific skill or technology. A lot of the MBA program variation that exists, as a result, caters to students who want a basic management platform and specialization in a particular topic as well (i.e. a bit of a dual major in the same graduate degree).

The cost of an MBA degree frequently depends on where one is accepted and goes to school. Naturally, a Harvard or UCLA MBA rings up a total cost ticket well over $150,000. However, the name recognition can be worth more in rapid advancement and recruitment by big name companies. On the other hand, a cost-conscious student or one looking to move up in their own company with minimum resources could earn an MBA degree from a local state university for closer to $10,000. In either case, the typical time needed tends to be one-and-a-half to two years for fulltime study and three years for part-time. With online MBA programs now available, a student could theoretically finish faster.

In terms of graduate success, MBA students back in the job market tend to perform fairly well. The average income level for MBA degree holders hits a median starting salary of $105,000, and those figures don’t include those who promote within their own companies after graduation to higher levels.

For employers, an MBA graduate with work experience is a ready package that can typically be dropped into most units and teams and hit the ground running. The key factor that separates basic recruits from rising stars, however, tends to be soft skills and the ability to network. The MBA education is a door-opener, but what one does with it depends on their communication and personality capabilities. However, unlike those who rise up in one particular part of an organization, MBA recruits tend to be able to adapt to big picture thinking faster, which is often the bread and butter of executive roles.

The Masters Degree in Economics

Where the MBA above was a generalist study path, the Masters in Economics is a specialization direction. A student is dedicating him or herself to deep-dive into what moves human behavior in business and finance and production. Whether focusing on micro or macroeconomics or covering both, the student becomes an expert in the anthropology of human financial thinking and predictable results in the expected future.

The typical study course and nature of an Economics graduate degree will expose the student to studies in advanced data analysis and statistics, economic research at the graduate level, econometrics, economic math, market economic specialization (such as utilities, international economics, labor, monetary policy, economic and policy analysis, and public policy).

As the student develops and moves through the program to culmination, the graduate degree path opens the door for either moving back to the work world or going further into academia. Unlike the MBA, which is often a terminal degree choice, the Masters in Economics with a thesis can easily be the next stepping stone for pursuing a doctorate degree in the same field or similar. Many who have spent time in the work world see a graduate Economics degree as a more respected path towards a professorship and a second career in academia as they work towards an ultimate PhD destination.

The cost of a Masters degree in Economics tends to be less than that of an MBA in the same school. Much of the financial different tends to be associated with the Economics graduate degree taking less time to complete, usually a year to a year and a half at the longest. For those seeking to directly back to the work world instead of studying while employed, the shorter degree means less of an impact to their income earning capability as well as less student loan debt. So, when one compares degree path costs, clearly the up-front cost has to be matched with income loss and school financing to see the entire picture.

In terms of specific expense for tuition and class fees, a graduate student in Economics can expect to pay $10,000 to $25,000 per year, or $15,000 to $40,000 in total for the degree, markedly less than other graduate degrees but still a serious cost for anyone going back to school.

Graduates tend to find roles in government as policy advisors and financial researchers as well as in corporations, the banking industry and the financial investment markets as these all have a common need for quantified prediction of the financial future, the bread and butter of the economist’s work. To enhance their specialty in the investment world, many economics graduates also then pursue a chartered financial analyst or CFA title. This professional credential allows the graduate to work independently as a licensed financial advisor and their own professional business. The salary for an economics graduate varies wildly from a low of $60,000 to as much as $130,000 annually.

The Economics masters degree cost less and can be completed faster, but it specializes the student and may actually limit job options into specific field areas. However, it’s a far strong path to take if the ultimate goal is a career in academia as well.The MBA provides a student a ready path into management and ultimately executive leadership and the ability to drop into most managers roles and perform at a basic level. It’s ideal for those who are seeking promotions in careers or the ability to jump to higher-paying leadership roles in their industry. The MBA, however, is more of a terminal degree and not well-suited for an eventual academia career. It also tends to cost more in tuition and fees as the program takes longer to complete. 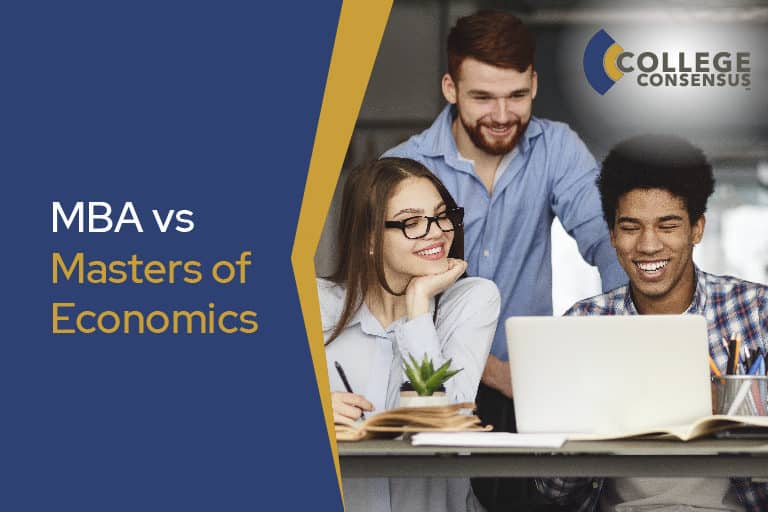