Founded in 1904, Saint Michael’s College began as Saint Michael’s Institute, a boy’s school that combined high school and early college courses. The Society of Saint Edmund, the college’s founders, had fled France to escape persecution under the Third Republic, and they brought with them what they knew best – education. Though it was a small local school through the first half of the century, Saint Michael’s student population boomed after WWII, with veterans using their GI Bill to earn college degrees for their civilian careers. After becoming coeducational in 1970, Saint Michael’s – affectionately called St. Mike’s by students and alumni – has steadily grown in size and reputation, ranking as a U.S. News & World Report top-tier national liberal arts college, as well as a best value.

Saint Michael’s is a primarily undergraduate, traditional liberal arts college, with more than 30 bachelor’s degree majors in areas like business, education, and psychology. As a small liberal arts college, Saint Michael’s emphasizes connection and mentorship, with small class sizes (an average of 19 students) and a 12:1 student:faculty ratio. That focus on community building and collaboration means students have an excellent level of support, and every course is taught by faculty members, not assistants, most of whom hold the highest degree in their field. Four Saint Michael’s professors have been named Vermont’s Professor of the Year by the Carnegie Foundation.

The undergraduate curriculum at Saint Michael’s is rooted in the classical humanities and sciences, reflecting its heritage as a liberal arts college, and all students develop a strong grounding in critical thought, communication, collaboration, and leadership. As a Catholic college, all students are required to take courses in philosophy and Christian thought. All courses have an experiential project or activity built in, from research projects to internships, study abroad to service learning.

The student body at Saint Michael’s numbers just over 2000, 16% of whom come from Vermont. Almost all students (98%) live on campus, developing a strong, close-knit community that works, learns, and grows together. With its Catholic heritage, built on a commitment to humanity and faith, service is a major part of student life. More than 70% of the student body participates in some form of community service or engagement, from social justice activism, service trips abroad, on-campus ministry, and other programs designed to help students grow spiritually as they improve the lives of others. Saint Michael’s is also a national and regional leader in sustainability, including being named the first fair-trade college in Vermont, an organic garden supplying food services, and collaborating with Burlington, the nation’s first all-renewable energy city.

Situated on more than 400 rural acres, Saint Michael’s is nevertheless only minutes from Burlington, Vermont’s largest and busiest city. Students get to be part of the arts and culture of Burlington, and enjoy the many outdoor adventure sports and activities Vermont has to offer, from skiing and snowboarding to hiking and mountain-climbing. There are more than 40 student-led groups and clubs, including professional development organizations, performance ensembles, and recreation and entertainment clubs. The Purple Knights compete in 21 NCAA Division II varsity sports; a quarter of all students are student-athletes. 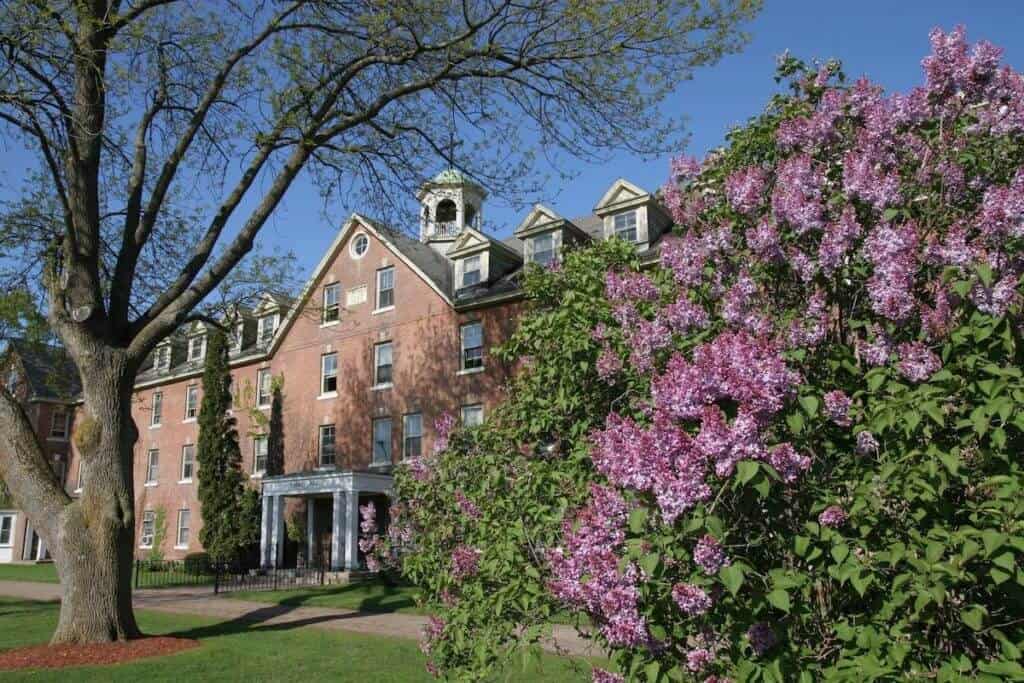