Virginia Military Institute is a public, 4-year school located in Lexington, VA in the Shenandoah Valley about 45 miles northwest of Lynchburg. The school was founded in 1839 and is the oldest state supported college in the country. VMI differs from the federal service academies in that graduates may accept a commission in the armed forces or pursue civilian careers. VMI cadets distinguished themselves on both sides of the Civil War, with 15 graduates made the rank of General in the Confederate Army; one made General in the Union. After a legal battle, VMI admitted female cadets in 1997. The 130 acre campus, referred to as the “Post” features the VMI Historic District which is included on the National Register of Historic Places. Notable alumni include General George Marshall, Nobel Peace Prize winner and author of the Marshall Plan; and Jonathan Daniels, an American civil rights activist who died protecting a protester in 1965, and whose name is inscribed on Caterbury Cathedral as a Anglican martyr.

Virginia Military Institute is accredited by the Southern Association of Colleges and Schools, Commission on Colleges and offers over a dozen Bachelor’s degrees in Engineering, Liberal Arts, Humanities and the Sciences. Fifteen academic departments and ROTC units prepare cadets to excel in the military, in graduate school, and in civilian careers. The degree programs include: biology; chemistry; civil engineering; computer and information sciences; economics and business; electrical and computer engineering; English, rhetoric and humanistic studies; history; international studies and political science; applied mathematics; mechanical engineering; modern languages and cultures; physics; and psychology. The largest programs on campus are in Social Sciences and Engineering. Per the Mission Statement, the school’s purpose is “to develop educated, honorable men and women, prepared for the varied work of civil life, imbued with love of learning, confident in the functions and attitudes of leadership, possessing a high sense of public service, advocates of the American democracy and free enterprise system, and ready as citizen-soldiers to defend their country in time of national peril.”

There are over 1,700 undergraduate students enrolled in Virginia Military Institute, all of whom live on campus in “The Barracks” – a residence whose spartan accommodations reflect the rigor of the Institute. Residential life is disciplined, with cots instead of beds and wearing traditional uniforms. New Cadets have fewer privileges than upperclassmen. The school sponsors over 50 clubs and student organizations including affinity groups, service and career organizations and club sports. For the varsity athlete, the red, white and yellow Keydets, led by Moe the Kangaroo, field teams in 16 sports and participate in NCAA Division I-AA competition. The school is rich in tradition from the daily playing of “Taps” to the “Ring Figure” dance at the Junior year ring ceremony. Each May 15, VMI honors fallen cadets with a new Market Day parade and ceremony. VMI is also known for its Honor Code, “a cadet does not lie, cheat, steal, nor tolerate those who do” and the formal expulsion process as the only penalty for infraction. The stated Values include Honor, Integrity, Accountability and Respect.
Rankings that feature Virginia Military Institute 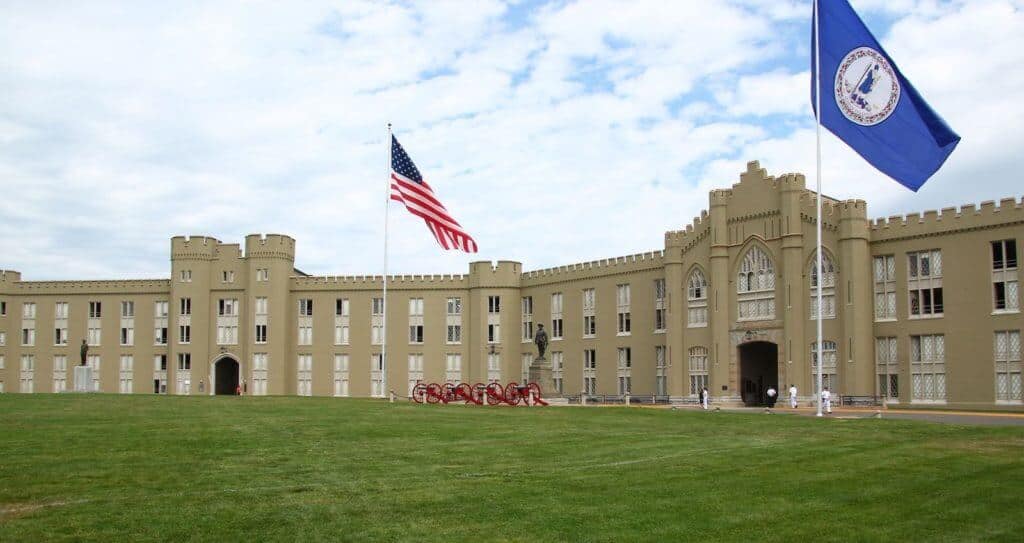