Although women are still underrepresented in the best paying careers, the proverbial glass ceiling is far more fragile than it was a few decades ago. Women were once relegated to low-paying jobs that supported their husband’s income, but rarely surpassed it. Various factors such as child-rearing, chauvinism, gender bias, and a lack of access to advanced educational opportunities kept women out of the professional workforce. These issues have fallen by the wayside over the decades as more women have found their way into once male-dominated fields and have slowly changed how women are viewed in the workforce. Higher paying jobs for women have also become a reality with employers becoming more cognizant of the contributions women are bringing to the employment table.

According to the U.S. Bureau of Labor Statistics, females’ earnings were 62 percent that of males’ in 1979. The gap narrowed steadily through the ’80s and ’90s, and the female-to-male earnings ratio now averages around 80 to 83 percent.

Researchers at the University of Chicago Booth School of Business have a couple of theories to explain the earnings gender gap.

The first has to do with college majors. Many female students opt for studies like literature or art history. Careers in those disciplines may be highly rewarding, but they have lower earnings on average. Female students who hope to increase their earning power should focus on what are known as STEM majors — science, technology, engineering and mathematics.

Another reason for the pay discrepancy is that females are more willing to earn less in exchange for workplace flexibility. This is probably because they are starting families.

The field of veterinary science was once a field dominated by men, but has been attracting more women due to various factors. Women frequently cite the love of animals, the lack of gender discrimination in school admissions, a love of animals, and the ability to study animal science and medicine as their reasons for entering veterinary medicine.

Another factor that draws women to veterinary school is the fact that they can work as small animal veterinarians and not have to deal with large animals. Those who decide to work with large animals have access to the latest in chemical and mechanical restraints that allow them to safely work on and around large animals with minimal concern of being injured as they assess the status of the animal.

The medical field has been steadily attracting more women to the profession as the anticipated shortage of doctors starts to become a reality. Medical schools are expanding their class sizes and opening up new schools to accommodate the demand for physicians. In the past, women have felt intimidated and discriminated against by male authority figures in the medical field. This has kept women from applying for medical school, but now attitudes towards women in medicine are changing as more physicians retire and the number of qualified medical professionals is shrinking.

In 2019, women made up the majority of U.S. medical students for the first time ever with 50.5% of the medical student population. A large number of women work as doctors and surgeons, and are slowly changing the face of a once-male-dominated field. The average salary for a female physician is on the low end, but many go on to make much higher salaries over the course of their career. As more women enter the medical field to work as physicians and surgeons, the better the outlook gets for them in terms of earnings potential, job satisfaction, and career growth.

Women are attracted to the pharmacy field due to the perception that it’s a family-friendly field and the idea that women are natural communicators and empathetic to those in need. It’s also a field that provides one of the highest-paying jobs for women who want to work in one of the STEM fields, raise a family, enjoy their career, and provide care to people in need. Working hours in the retail sector tend to be favorable towards work-life balance, and many female pharmacists can return to work part-time once their children are old enough for daycare. The shift over time from independent pharmacists to pharmacists working for employers helped attract more women to the career.

Physicians assistants work under the supervision of physicians and perform many of the same duties as a doctor or surgeon. This is one of the highest-paying jobs for women due to the fact that the physician assistant is essentially a physician without the M.D. Women find their way into the role through nursing, or enter college with the intention of becoming a physician assistant. Research has found that women enter the field because it enables them to gain medical knowledge and the ability to practice medicine without the high cost and pressures of medical school.

Nurse practitioners perform many of the duties as a physician, but work under the supervision of a doctor. It’s a field dominated by women due to the fact that men have historically been dissuaded from becoming nurses. It’s also an excellent educational and career track as many nurse practitioners started out as a registered nurse, then returned to school to earn advanced degrees over the course of their career. The role is attractive to women who are also mothers and want to earn a good salary, help people with their medical needs, and have flexible hours to spend more time with family. It’s one of the higher-paying jobs for women with the potential for large salary increases as the demand for medical professionals grows.

Human resources has long been a female-dominated field due to the perception that it’s a role that is more suitable for women than men. The stereotype that women are better at making judgments with regards to personality traits and matching them with employment roles is another factor. Women have higher levels of emotional intelligence than men do, and this trait is useful when it comes to conflict resolution, managing people, and negotiation.

There’s no denying that these are stereotypes, but they do have a basis in reality, and women have an edge over men when it comes to being effective human resource managers. Ultimately, this is one of the higher-paying jobs for women, and it’s also where conforming to stereotypes can pay off.

A management analyst is a type of consultant that looks at the current operating structure of an organization and finds ways to improve it. That includes reviewing and analyzing reports, procedures, manuals, system designs, and any other type of material that instructs employees how to perform their duties. Women are reaching employment parity in this field due to more women attending school for their bachelor’s degree in business and earning their masters of business administration degree.

The role of management analyst is attractive to women as it’s one of the high-paying jobs for women that offer a reasonable work-life balance. It’s also a role that takes advantage of the ability to think critically and combine logical thinking with emotional intelligence to find solutions to problems.

The field of psychology attracts more women than men for various reasons. They include the fact that women are physically more empathetic than men, are more able to turn thoughts into words, and the ability to observe non-verbal gestures that act as a type of language. These reasons and others have factual basis and are not based on stereotypes. The female brain possesses more of the physical characteristics that drive the observational and empathetic functions of the mind than men do. This makes women naturally predisposed to work as psychologists and provide support to those who are in need of mental health treatment.

Women are drawn to the field of psychology because it’s one of the highest-paying jobs for women, but it’s also an opportunity to work as a healer of the mind. Psychology is also a field that has multiple concentrations, and gives women the option to focus in an area of psychology that suits them best in terms of aptitude and interest.

Occupational therapy is a type of therapy that was created after WWI to help soldiers regain the function of their limbs in order to perform daily tasks. Women originally made up the entire field and have yet to yield their dominance in the occupational therapy field. No one reason has been found for this, but it’s an excellent career for women who want to work in one of the highest-paying jobs for women and enjoy the satisfaction that comes with helping people become self-sufficient with their daily tasks.

While it’s unknown why women dominate the field of occupational therapy, it is a great career and one of the higher-paying jobs for women. Occupational therapy is gentle for both practitioner and patient, and highly effective, which delivers high job satisfaction for those who pursue it as a career.

Women started entering the field of public relations and fundraising during WWII when women stepped in to fill the roles left empty by men going to war. Since then, the field has been dominated by women at the lower levels, but the executive levels have been dominated by men. However, women are pushing their way up the ladder and gaining access to executive titles with higher pay.

The field of public relations and fundraising has been dominated by women due to the perception that women are good at finding solutions to complex problems, have a talent for building reputations with solid foundations for clients, and are skilled crisis managers. When it comes to higher-paying jobs for women, the public relations and fundraising field provides an excellent average salary that increases with time and experience.

How Do Jobs Like These Improve the Gender Pay Gap?

Women are perceived as making less money than men for the same roles for the perceived reason that men need to provide for their families and women need to be available to raise children and run the household. While this has been one of the most cited reasons, there are more nuanced issues such as employment interruptions due to pregnancy and the raising of children, educational opportunity, and work experience. These issues and the breaks in employment that are caused by pregnancy and child-rearing have also affected the average income for women.

The gender pay gap has been steadily closing over the decades, and in 2020, women earned .93 for every dollar men earned. These jobs prove that women can engage in higher-paying jobs for women, perform to the best of their abilities in stressful jobs, and still manage to be available for the family. All of these jobs provide set or flexible hours that create predictability, or make it easy to take time off to take care of the needs of the family. In turn, women stay employed for longer than they otherwise would in lower-paying fields.

What Factors Make These High-Paying Jobs for Women?

All of these jobs require higher education that is time-intensive, the ability and aptitude to learn and utilize knowledge, and be effective in their role. Women in these roles are expected to perform at the top of their abilities at all times, provide top-notch results, and perform duties that can’t be accomplished with just a little bit of training.

Most of these roles are stressful because they are also ones of higher responsibility and decision-making. A lot of things rest on the shoulders of those who take on these careers, but employers tend to reward those who put in the effort with excellent compensation. Higher-paying jobs for women are worth working towards in terms of education and effort because they offer an income that enables a high quality of living for themselves and their families. 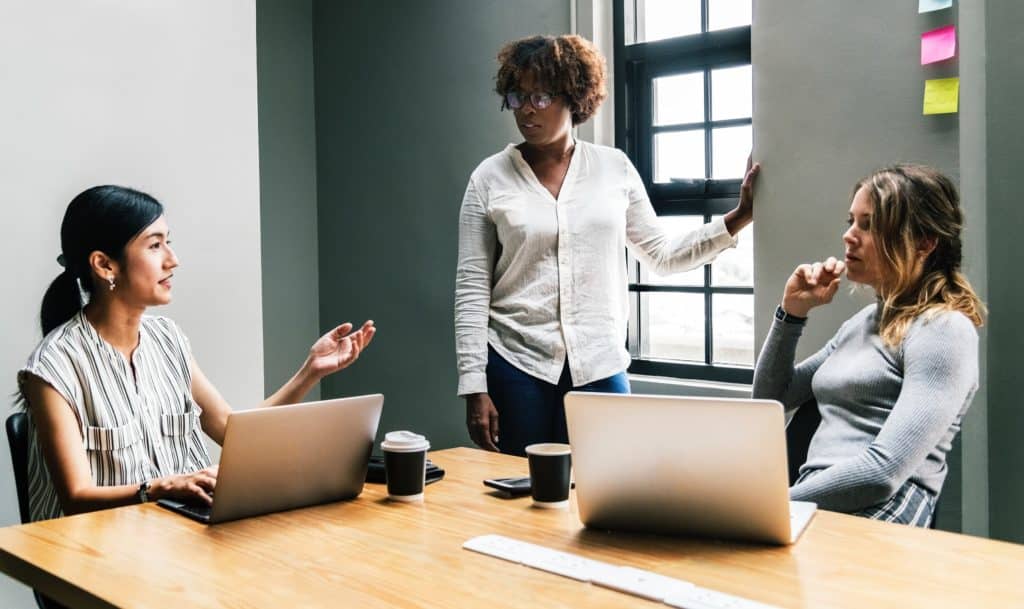