The University of La Verne is a private, coeducational institution of higher education affiliated with the Churches of the Brethren and located in La Verne, California. Established in 1891 as Lordsburg College, the school was founded by members of the Church of the Brethren, a German Christian sect which was historically considered to be one of the “peace churches”. In 1917 Lordsburg College was renamed La Verne after its surrounding agricultural community and in 1977 the school was reorganized as the University of La Verne. Today, the University of La Verne remains dedicated to the belief that “quality, values-based education enriches the human condition by engendering service, scholarly accomplishment, and professionalism.”

University of La Verne is accredited by the Western Association of Schools and Colleges and has been so since 1955. The mission of the University of La Verne is to offer a “distinctive and relevant educational experience to a diverse population of traditional-age, adult, and graduate learners preparing them for successful careers and a commitment to life-long learning across the liberal arts and professional programs.”

The University of La Verne offers a wide range of academic programs at both the undergraduate and graduate levels and consists of several colleges. These include The College of Arts and Sciences which offers more than 50 majors, minors and certificate programs, at least two masters’ degrees and a doctorate in Clinical Psychology. The University of La Verne’s College of Business & Public Management offers undergraduate programs in business, public administration, and health management as well as masters’ degrees in business, organizational leadership, health and public administration and a doctoral degree in public administration (D.PA.);The LaFetra College of Education offers undergraduate programs in education plus several masters’ degrees and a doctorate degree (Ed.D.); and The College of Law, which is located on its own campus in Ontario, California, which offers a rigorous J.D. academic program.

The University of La Verne has a total enrollment figure of more than 8,000, including well over 5,000 undergraduate students. The University boasts a highly diverse student body with a large percentage of Latino/ Hispanic students, approximately 20% Caucasian, more than 6% African American, over 5% Asian American/ Pacific Islander, and more than 24% of other ethnic identities.

More than 60 active student clubs, organizations and groups are recognized by the University of La Verne, including several fraternities and sororities, student government, a student newspaper, radio and television stations. These and other activities and events provide valuable opportunities for students to interact with one another outside of the classroom setting and develop vital leadership qualities and skills. As an NCAA Division III school, the University of La Verne’s several athletic teams compete in the Southern California Intercollegiate Athletic Conference and have won numerous championships, claiming NCAA team titles in sports such as baseball, men’s volleyball, and women’s volleyball.

College of Business and Public Management 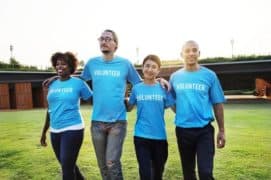