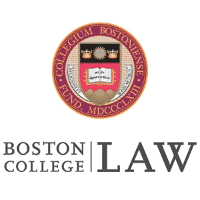 The Boston College Law School (BC Law) has resided in its current 40-acre campus in Newton, Massachusetts since 1975. Prior to its current home, the school was housed on the main campus of Boston College for 21 years but its original home was in close proximity to the Massachusetts State House in downtown Boston. The school was chartered in the latter part of the 19th century but didn’t open its doors until 1929. Originally founded by Jesuits, the law school has remained committed to human rights and social justice. Admission to the school is extremely competitive with less than 30% of applicants being admitted each fall. In its less than 100 year history, the school has produced a number of notable lawyers and judges including the former United States Secretary of State John Kerry.

In the first year, students at BC Law build the foundation for their future education and legal careers with a focus on the core courses of Civil Procedure, Constitutional Law, Contracts, Criminal Law, Property, and Torts. In addition, students complete coursework in the sources of law, the practice of law, and professional ethics. In their classes on the practice of law, students build critical skills in legal writing, research, and analytics.

BC Law provides its 2nd and 3rd year students with a wide range of classes concentrated in 19 different subject areas and over 200 courses. Students are free to select their courses but must satisfy the requirements for six credits of experiential education, a professional responsibility course, an upper level writing assignment, and a class in perspectives on law.

In addition to its course offerings in Boston, BC Law has established externship courses with partner schools in London and Washington, D.C. where students can immerse themselves in domestic and international educational opportunities.

In addition to its Juris Doctor degree, BC Law offers a Masters of Law (LL.M) program for students who wish to build upon their legal education. In the program, students concentrate on one of four practice areas: Environmental Law, Human Rights, Intellectual Property, or Taxation. LL.M students may also utilize the broader resources of Boston College to build an interdisciplinary degree that leverages the strengths of the entire campus. The LL.M program does admit students from foreign universities but requires English fluency.

BC Law also a joint degree program with their business school. Students earn both their Juris Doctor and an MBA in approximately 4 years. Additionally, Boston College Law School has dual degrees available in conjunction with other educational institutions such as Tufts University which allow students to earn their law degree as well as an M.D. or a Masters of Public Health. Admission to both programs is required.

For the past three years, over 90% of the graduates of BC Law have found long term employment within 10 months of graduation. In 2018, over 85% of those jobs required bar passage or preferenced a Juris Doctor degree. The majority of graduates worked in law firms with just over half accepting jobs in large firms. Massachusetts is by far the most common location for graduates to practice law although New York City attracts a small but substantial population.

The Career Center at BC Law provides over 100 programs each year to help students find their career path. Most students find their eventual first employer through the on-campus interview process or through a job fair (44%) while over 20% found employment through networking and referrals. The Career Center also provides a “boot camp” during student’s first year to help build the skills–such as resume drafting and interviewing–to secure their first jobs.

BC Law manages all their experiential learning through their unique “Center for Experiential Learning” which houses their clinical, externship, and lab programs. Students are required to earn six credit hours of experiential education which begins in their first year with their legal practices courses. BC Law students participate in a number of competitions that rely on legal skills including trial and appellate advocacy, negotiation, and client counseling. The legal services lab connects students with real clients who need legal representation. Founded in the late 1960s, the BC Law lab has become a model for other law school clinical programs. In the lab, students focus on nine different practice areas and work out of the main office on campus or a number of satellite campuses throughout the city of Boston to provide legal services to those who need it.

Boston College Law School is renowned for its emphasis on the quality of student life earning the school the nickname “The Disneyland of Law Schools.” BC Law faculty pride themselves on an open-door policy that allows them to interact with students both professionally and personally to help foster an educational atmosphere that is both challenging and supportive. Students organize over 40 student groups and publications that offer a wide range of civic, social, and academic opportunities.

BC Law’s 40-acre campus is just outside the city of Boston with access to a host of city parks and trails. The large, dedicated campus houses the law library, an on-campus dining facility, and any number of student spaces for meetings both formal and casual. Housing is widely available in the surrounding communities. Finally, BC Law is a rich part of the tradition of the city of Boston. The Boston Marathon course runs right by the school and students can fully immerse themselves in one of the most historical cities in the United States.